In a former life I used to smoke pipes. I still smoke the rare bowl or treat myself to a fine cigar once or twice a year, but with kids and living in an apartment it really is impractical (yes and of course smoking kills you, there is that too). These days I collect them and, although not an expert by any stretch of the imagination, I refurbish them. 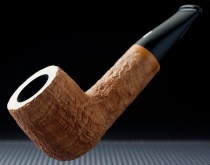 It is a soothing affair and one that reminds me so much of the ceremony that goes into actually enjoying a bowl of Cavendish. I say ceremony because unlike cigars and certainly cigarettes, the preparation involved in packing and smoking a pipe is really akin to that of preparing a proper pot or cup of tea – the journey is almost better than the final destination. The way you pack your pipe and char the tobacco at the top, tampering it slightly before firing up the rest of the bowl. Then much like a fireplace you must tend to it, fussing over it to make sure it burns evenly without overheating the pipe itself, burning too quickly or heaven forbid extinguish itself for lack of attention. Once finished it must be emptied, carefully cleaned and then set aside to rest within a rotation of trusted pipes so as not to be overwork lest it become sour. It is certainly trivial in the grander scheme of things for me to glorify the act of smoking a pipe, but I picture it as I buff and polish some of the estate pipes that I come across and add to my growing collection not for want, but for the mere act of daydreaming. It is a much needed mental break in a week of work in the office and at home as a parent. One of those moments that I have to myself during which I relive a fond memory while preserving some mental (and physical) health.

It’s been a while. Writing has always been my preferred medium of communication. You write a first draft. Review and edit. Share it with others and evolve what you have […]
Do people still read?

Imperial is the first word that comes to mind when wandering the streets of Vienna. Over the past twenty-five years I have visited this European capital dozens of times and […]
Discovering Vienna with kids
%d bloggers like this: